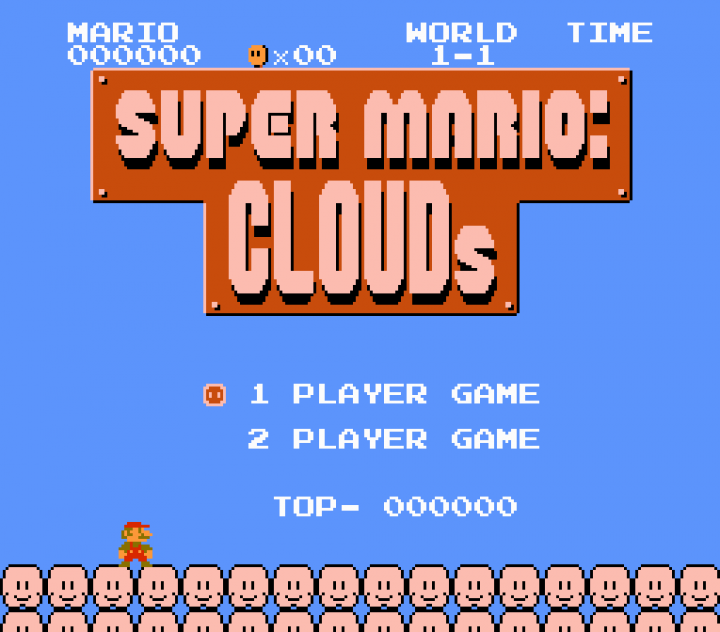 In 2002, Cory Arcangel “hacked” a physical cartridge of Super Mario Brothers, the original version of the Nintendo’s blockbuster videogame (released in the United States in 1985). Initially presented as an installation piece, the artist ostensibly erased all of the sound and visual elements except the iconic scrolling clouds. Arcangel’s Super Mario Clouds has proven to be one of the most popular and enduring videogame hacks (and perhaps pieces of videogame art) in academic and popular discourses, having been featured in museums, books, and videos. Nearly 20 years after the release of Super Mario Clouds, I have created a loving parody of the famous art piece. Super Mario: Clouds is an aesthetic hack of Super Mario Bros with a strong emphasis on visible masses of condensed water – particularly those with a sunny disposition. Although the game remains more-or-less mechanically unchanged, nearly every block and enemy has either been turned into a cloud or taken on some cloud-like attributes.

A frivolous endeavour? Perhaps. But maybe we can take some joy in the hordes of smiling clouds that greet Mario as he traipses across the mushroom kingdom.

Super Mario: Clouds was created using a Super Mario Bros ROM and a variety of hacking tools sourced from ROMHacking.net. TileLayerPro and SMB Graphics Workshop were used to edit the game’s sprites and reassign how they are used in-game, while SMB Utility and the SMB Title Editor were leveraged to tweak level themes and the title screen (respectively). The hack represents about 10-15 hours of work, including bug-testing, and will not be further updated barring the discovery of catastrophic errors.