It’s been a while since the last installment of this feature. To be frank, I’ve had a hard time finding Kickstarter projects that I find remotely interesting. It seems that the creative tsunami Tim Schaffer conjured up that spurred so many great projects has finally ebbed, leaving in it’s wake a stagnant pool of mediocrity. While that statement might be steeped in melodrama  – I honestly just liked writing it – it’s genuinely taken me a while to find a collection of projects worth blogifying. Enough with the preamble. Ladies and gentlemen, here’s a handful of Kickstarter projects for your consideration.

Well, well, well. If it isn’t my old nemesis Pathfinder Online. It appears my vitriolic verbal barbs weren’t enough to sink you. Yes, the dubious MMORPG project Pathfinder Online has its own Kickstarter project. Of course, it’d be completely ridiculous to fund an entire 3D MMORPG using Kickstarter given the cost of those things. Instead Goblinworks has set their sights on the much more modest goal of funding a technology demo. They’ve already doubled their $50 000 goal, largely because they’re handing out a free Pathfinder book at the $15 (pdf) and $50 (print) donation levels. I’m still wary of the project, but if you’re a Pathfinder fan after the book the pledge basically pays for itself. Well played Pathfinder Online. I’ll have to devise some harrowing new adjectives for our next encounter. The dance continues.

This one is interesting. Bibelot Games is releasing a line of twelve ancient games from all over the world, most of which you’ve probably never heard of. Each game is packaged in a compact leather pouch that doubles as the game board when unfurled. The production value looks top notch, complete with laser etching on the leather and durable sets of polished marble and wood pieces. The Reliquary Collection is really more alluring as a historical curio than as something to break out at a party. It’s a nice gift idea if you know someone who’s into that sort of thing, although the price is steep at $40 for a single game. The lower pledge tier, offering a set of 56 of the gorgeous marble and wood playing pieces for $20, is a much more tempting investment. 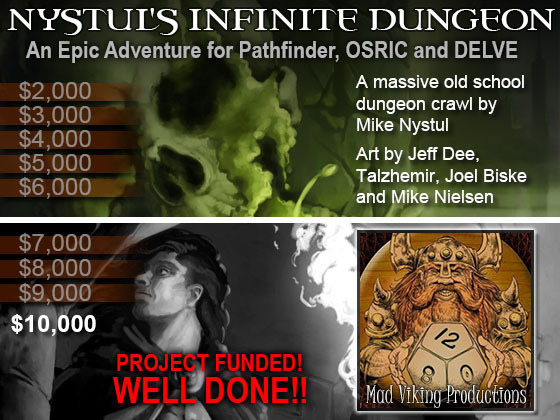 Mike Nystul knows his way around a dungeon. He wrote a plethora of roleplaying game products in the 1990s and holds the prestigious distinction of having a Dungeons and Dragons spell named after him. It’s no surprise that his megadungeon Kickstarter project has already quadrupled the goal he laid out. There’s not a lot to say about Nystul’s Infinite Dungeon that hasn’t already been covered in my Dwimmermount synopsis. If you’re a pen and paper fanatic who wants a labyrinthine death trap to hack and slash through, then pledge $25 for a digital copy. If roleplaying isn’t your bag, then go outside and do whatever it is  you socially well-adjusted people do.